Tumkur road is one of most popular locations in north-west part of Bangalore. This stretch of the city is gaining popularity with the arrival of metro rail and this has improved the connectivity of this area to all parts of the city including the major commercial areas of the city. Well developed social infrastructure and accessibility to all the civic amenities easily makes this locality one of the most sought after locations for home seekers in this location. The brilliant networking of this area is changing the very basic industrial character of this region and is driving the demand for residential options in and around. Real estate projects like Godrej Gold County, Salarpuria sattva opus, Salarpuria sattva Laurel heights, Tata New Haven, Vaishnavi Gardenia and many more are coming up in this area of Tumkur road. In the past few years the equation of real estate demand in this area is mushrooming and eventually changing with the every passing year.


Bangalore real estate market is on the verge of progress as it is focusing mainly on the interest of end users rather than investors. This city has been growing rapidly over the past few years mostly due to IT and ITES Companies. The diverse population and upgraded physical infrastructure has played a lead role in enhancing the Bangalore real estate market. At present, the most demanding regions for residential development are ORR, Tumkur Road, Whitefield and West Bangalore.


West Bangalore is one such part of the city which is oozing out to be a source of development. Due to the availability of land parcels at lower acquisition costs, real estate developers are planning to launch many new projects in this region. The proximity to metro station, Bangalore International Airport and connectivity to prime locations of the city and central business district the property prices are expected to rise in near future. Areas like Banaswadi, Tumkur, Devanahalli, Peenya, Hennur Road etc. are witnessing a high demand as people working in IT Parks and other MNC’s are showing interest for affordable homes


Prestige Jindal City is positioned in one of the rapid developing parts of Bangalore, Tumkur Road in Western part of the city. Basic amenities like retail stores, educational institutions, hospitals, banks, and shopping centers are located close to the project site. Tumkur Road is smoothly connected to many IT Hubs, MNC’s and other small enterprises which is also one reason for the rising demand of a home mostly by the professionals. This part of the city has abundant parks and lakes which has helped in maintaining the greenery and serenity of this place. Some of the key locations from Prestige Jindal City are- 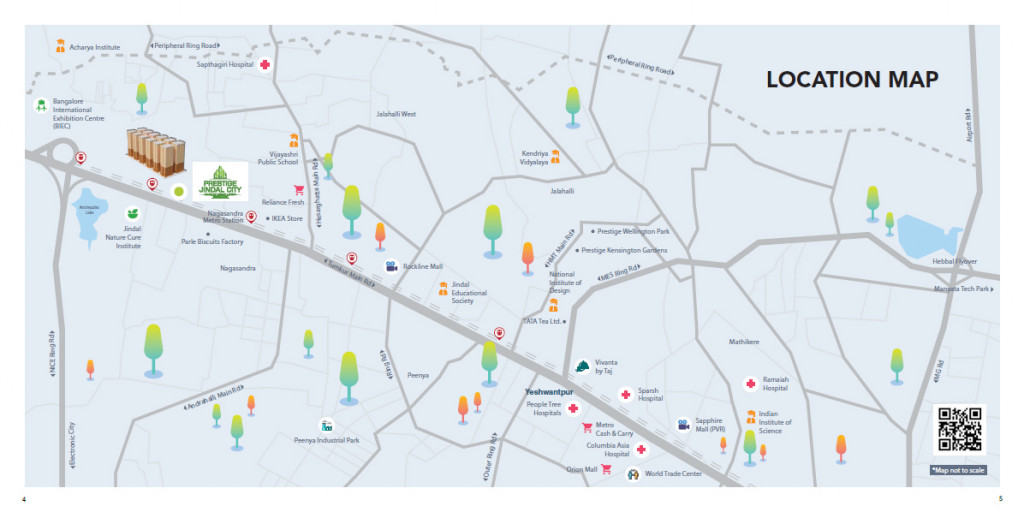